Six weeks have passed since my last check-in. We’ve been busy – I’ve been busy! Life for me has gotten busier and I have been trying to be gentle with myself and accept that I am not superwoman and sometimes I need to take time for me. But busy has included exciting changes and I am embracing them.

The first exciting change is that my writing career is looking up. I have decided that I am going to try to freelance. I was actually brave enough to ask my supervisor at work if I can cut my hours down to part-time – and it was approved! Throughout the last 6 months or so, I have felt the urge to move on so strongly but held out with the hopes of being able to do just this. I like it enough that I don’t actually want to leave altogether, my personality is just one that makes me like to do a variety of things and it just wasn’t cutting it for me. The last I heard, my position will be posted as open at the beginning of the year. Once it is filled, I will train the incoming employee, then drop to part-time at the end of February or in March. I’ll admit that now that it is coming up, I am getting nervous at going freelance. I failed at the housekeeping thing, but I think that I am a good writer and I have a few different ideas I am going to try to develop for income, so hopefully I won’t fail again.

The second exciting thing is that I do have an editor that wants me to write for him. The editor I currently blog for was doing an open house at the beginning of October and I decided to go meet him. He expressed interested in me doing more writing for him in multiple venues. More recently, he offered me a column in the magazine and I submitted my first piece to him, which should appear in the Jan/Feb edition. Dream come true!!!!! To see my name on an article in a magazine is the fulfillment of a dream of mine. How can I fail at this career jump if I already have someone who believes in me?!

Another big change is that I have met someone. Of course, I don’t want to sound as though just because I met a man that I should drop everything that I am doing for him. BUT I did- and do – have a lot of healing yet to get through from my past relationship and it needed some of my attention to sort out. I decided to allow myself to do so and not feel guilty and I’m glad I did. We are a few months in and things are going well. The whole thing is still relatively new and exciting, but as I am looking forward towards my career shift, I think because I let myself take the time to settle into “us,” I can now move forward with it in a less-distracted manner. I am starting to think about what I have left to do in these months prior to going part-time and what I need to do to start once I’m free to freelance. 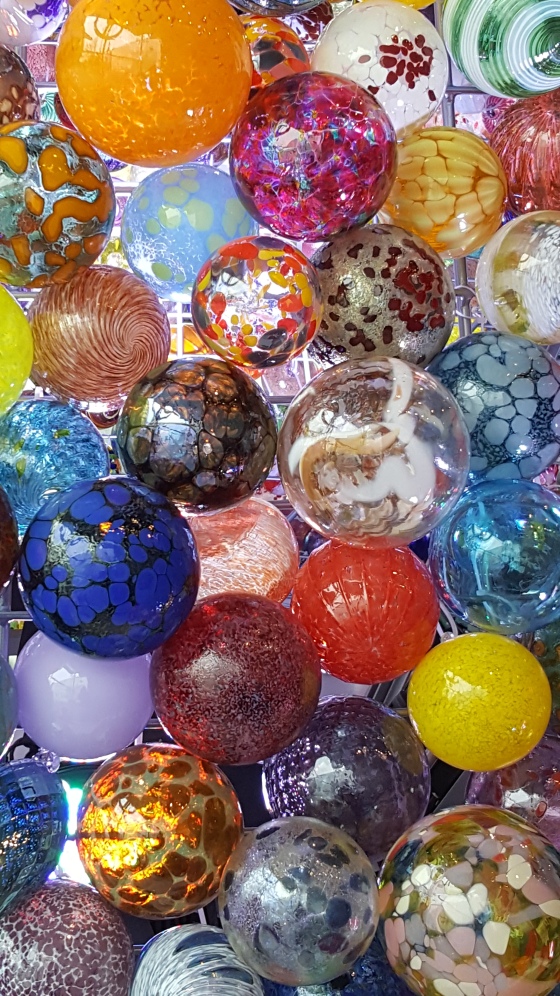 More of the holiday tree at the Corning Museum of Glass

All of this does not mean that I have given up on homeschooling. Paul and I did not do any school during November. We read the Thanksgiving book and discussed it on Thanksgiving day, but that was the extent of it. And that’s ok. The article I wrote for the actual magazine was due on 11/22, so I really put in a burst of energy to get it researched and written. I wanted to – needed to – put forth my very best with it.

The kitten in the tree

This month in our school, we have been slowly working through the holiday unit. The book does involve Santa, and though Santa doesn’t come to our house, it has given us a reason to discuss why not and why the story of St. Nick was invented. I don’t immediately crush the idea of him every time he comes up, but it’s been the basis of a few gentle conversations lately. If the kids want to believe, that’s fine, they just don’t get any presents from Santa. (Actually, we do our gift exchange before the 25th, so that shoots the story right down the drain anyway!)

One way I like to use the story, and one activity that is actually laid out in the curriculum, is to discuss kindness and giving. I do often feel like this curriculum is lacking in character development. It includes some activities of introspection, but not like the Global Village curriculum. At times, I feel like it is not emphasized at all with the kids (in general) and that maybe Paul doesn’t even know what kindness is. Or maybe it’s just that I “get the worst” of them because our time together feels so limited.  Before bed, we have started to discuss something they did that day that showed kindness to someone else, without regards to whether that person was kind to them or not. That’s the true spirit of holidays.

And indeed, though I’m not always excited about the materialism of the holiday season, this year, I’ve had some interesting conversations with the two of them about things that matter and so I feel much more in the spirit than other years. Maybe too, I just have a few rays of hope shining at me that have been missing in the past few years.

I hope everyone has a wonderful holiday season!

One thought on “The Spirit of the Holidays. Reflections, Paul’s Pre-K, Weeks 17-19”