~Maurice Pledger, from In the Forest

August is one of my favorite months here in Central New York.  Everything is green and lush, though, if one looks they can see the very first signs of autumn coming, as some of the trees are just beginning to turn.  As well, so many plants are flowering still, or else have gone past the flowering stage and it is harvest time – for both domestic and wild plants.  Wildlife abound, though it will be until September that the migrating birds really begin to pass through.

With the heat and sun, summer is always a great time to get outside with the kids.  We did walk on the nature trail this month, though much, much less than last year as I am trying to balance working, parenting, keeping my house tended, homesschooling, and my own emotions.  I also took the kids to a state park where we had a blast and saw some neat things – including a lead-backed red-backed salamander, which is a red-backed salamander that is all blue-black in color and does not have a red back.  Elizabeth picked it up, and I snapped a picture, but it turned out a little blurry, so I chose to not include it in this post.  Oh well! 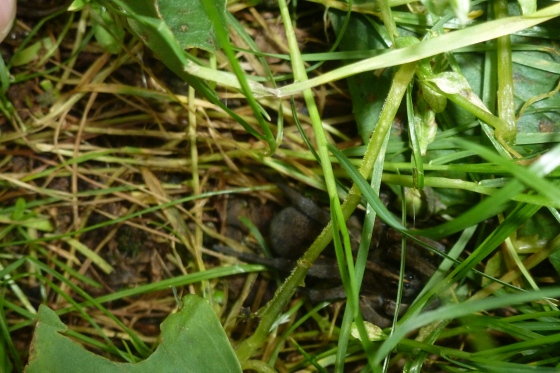 This spider is most definitely a wolf spider – look at the eyes on that thing!  I am a “little bit” of an arachnophobic, though I’ve gotten much better since living in Honduras with the Peace Corps where spiders were unavoidable.  They are in my current home too, and Paul found this lady outside one day.  He was talking about the spider webs in the holly bushes and then I saw him poking at something on the ground.  It was pretty big and I thought it was a small toad so I went over and stuck my finger down in the grass to get a better look.  Lo and behold it was not a toad but this huge spider!  I had other pictures of Elizabeth’s fingers next to it but this was the best one of the actual spider, and the body of this lady is only a little bit smaller than the tip of my daughter’s finger!  I ran away, Elizabeth tried to catch it.  🙂 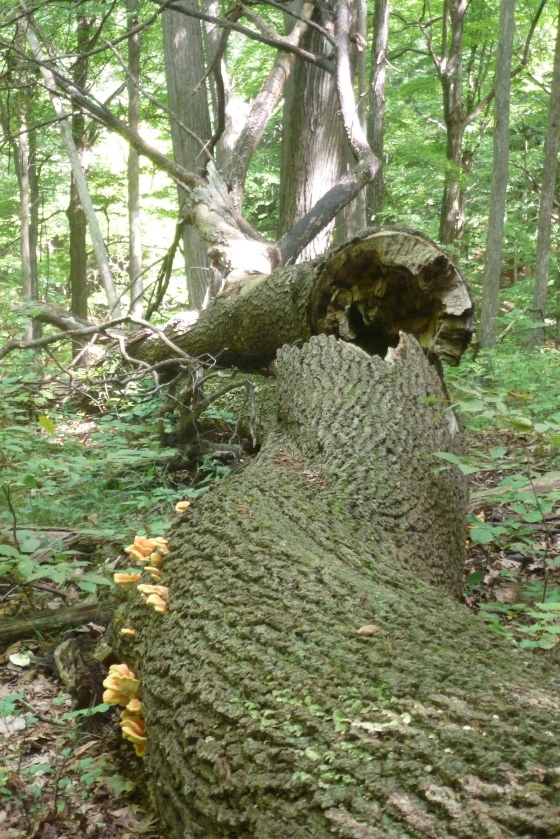 While at the state park where we found the salamanders, we re-encountered this large, fallen tree that is lots of fun to walk upon.  It has some neat orange (conk?) fungus on it’s side, and a delicate Jack-in-the-Pulpit growing at it’s feet.  The kids like to walk up and down it.  Elizabeth was very worried this time for the worms that may have once lived under it, because when the tree fell over, the roots pulled up with it, carrying lots of dirt, and she was worried about the lives of the worms that may have lived in that dirt still clinging to the roots.  She’s so sweet!

While out photographing flowers on the trail, I spotted this thistle along the field edge.  Most of the petals had fallen out, but the colors were still beautiful to me!  Elizabeth and I discussed how the finches like to each the thistle seeds, and how the leaves and stem are prickly.

Lastly, I also snapped a picture of the common Queen Anne’s Lace.  Did you know that if you put a Queen Anne’s Lace in a vase with food coloring, it will suck it up and the flowers with change to whatever color you added?  Yep, try it!